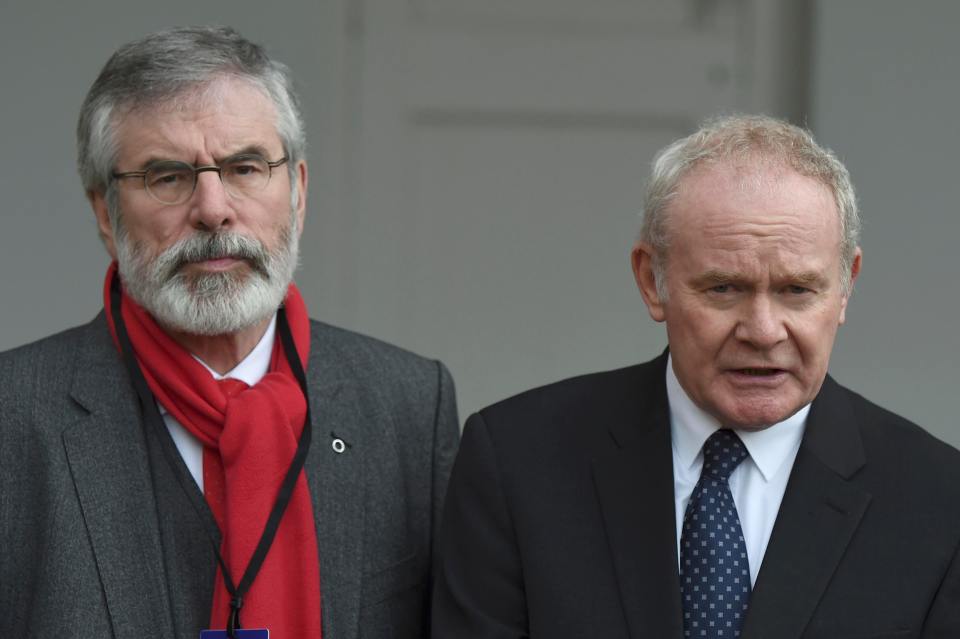 The Ugly Scaffolding of Democracy

This week liberals and metropolitans spent a lot of time analysing whether Trump was blackmailed by Russia during the American Election.

However, closer to home (if you’re in Europe), political instability could be on the horizon for Northern Ireland (NI) – Martin McGuinness resigned as Deputy First Minister of the Northern Ireland Assembly.

This news resulted in a couple of headlines in the UK and didn’t seem to reach the US press much at all (from what I can tell). The Irish Times reported similar levels of apathy coming from Dublin. This disinterest is curious in itself, as a couple of decades ago any news from NI would have been the top news story in a lot of Western countries.

Given NI is part of the UK, it is also subject to Brexit, despite their population voting to remain in the EU. They share the only land border with another EU country, the Republic of Ireland (RoI). Given the desire of many NI citizens to be part of the RoI, you would have thought there would be more outrage and debate coming from NI about their future sovereignty. Martin McGuinness’ resignation will probably lead to an election – a distraction for the people concerned about the upcoming triggering of Article 50.

On Reddit, many joke that the only politicians standing up for the interests of Northern Ireland are from the Scottish National Party – evidence of which can be seen here.

Even in Great Britain, many do not understand the complexities of the politics in NI. So we thought we’d provide an overview of the last 50 years of politics in NI as well as commentary on events this week. As a result, this newsletter may be the longest ever – we hope we’ll sustain your attention!

History of NI conflict since Oct 1968

The origins of the Troubles

From 1905 – 1972, Northern Ireland was exclusively ruled by the Ulster Unionist Party (UUP). This was historically a protestant party who believe NI sovereignty should be with the UK.

In October 1968, a group of Catholics, inspired by the human rights movement in America led by Martin Luther King, organised a march against the government

“The Northern Ireland Civil Rights Association (NICRA) called for wide-ranging reforms: it demanded equal voting rights in local government elections; a fairer system for the allocation of public housing; an end to ‘gerrymandering’ (the manipulation of electoral boundaries to give one community an electoral advantage); an end to discrimination in employment; the disbandment of the ‘B-Specials’ (an all-Protestant auxiliary police force); and the repeal of the Special Powers Act (which allowed for internment of suspects without trial).”

This march was met with violent resistance from the police. Batons and water cannon were used, and the images spread far over Northern Ireland. This reaction sparked further riots, which would lead to the founding of the Provisional Irish Republican Army (IRA).

Read more and see video of the march on BBC History

“During the Troubles, the scale of the killings perpetrated by all sides – republican and loyalist paramilitaries and the security forces – eventually exceeded 3,600. As many as 50,000 people were physically maimed or injured, with countless others psychologically damaged by the conflict, a legacy that continues to shape the post-1998 period.”

The Good Friday Agreement sets out a constitutional process for transferring sovereignty of NI to RoI if the citizens want it, recognition of both identities of NI and decommissioning of weapons.

It was agreed by most of the political parties, with the exception of the DUP, and is the foundation of the devolved assembly in NI.

The St Andrews Agreement was reached after political disagreement between the parties meant the devolved government in NI was suspended.

It set out a new criterion for power-sharing between the nationalists and the unionists.

“Over last 10 years I’ve worked with DUP leaders, and reached out to unionists on the basis of equality, respect and reconciliation. Over this period the actions of the British Government and the DUP… have previously undermined the institution and have eroded public confidence.

“Sinn Fein will not tolerate the arrogance of Arlene Foster. Sinn Fein wants equality and respect for everyone. That’s what this process should be about…. Today is the right time to call a halt to the DUP’s arrogance.”

The trigger – renewable heat incentive costs spiral out of control

The Renewable Heat Incentive (RHI) was overseen by (previous) First Minister Arlene Foster. It was devised as a method to encourage the people to heat their homes with renewable energy. However, a loop-hole in the scheme meant that some businesses are heating disused warehouses or sheds with renewable energy and collecting large premiums. Given that no upper limit of compensation was legally set, the costs of the scheme is nearing half a billion.

Sinn Fein called for Arlene Foster to resign as First Minister and she refused. Given that if the Deputy First Minister resigns then the First Minister also loses power due to the power-sharing agreement made in St Andrews, then this is a way of forcing Foster out.

The ugly scaffolding of democracy

“The Northern Ireland of today is a very different place from the Northern Ireland of 15/20 years ago. The old leaders of terrorism (if you like) have aged, and in McGuinness’ case, have aged quite dramatically over the last few weeks. There’s no possibility or fear that if these institutions were to fail in their current form that there’s any great price to pay… no one will slip back to terrorism.”

It’s not the cleverness of political leaders. It’s certainly not the interventions of London, Dublin or Washington leaders to cajole or coax the warring people of NI along a path to peace. The people did it themselves.”

Listen to Inside Politics podcast by the Irish Times

Losing McGuinness was a very bad move for Arlene

“In losing McGuinness Foster has blown the best chance unionism had to reach an amicable accommodation with republicans. Given his IRA past, his steely reputation during the IRA’s armed struggle, his known hardline reputation, Martin McGuinness was in as strong a position as any republican to make conciliatory moves.

“It’s the ‘Nixon and China’ syndrome or De Gaulle and Algeria. Men who came to positions of power after a hardline reputation that can’t be gainsaid by detractors. No one was more hostile to ‘Red China’ than Nixon so he could reach out to Chairman Mao. No one had a more patriotic reputation than De Gaulle so he could give Algeria independence.”

Read more in the Irish News

“So however way you look at it: History, population change, economics, the impact of Scottish independence or Brexit; Northern Ireland’s days are numbered.

“And because all the rational and optimistic arguments are now stacked in favour of Irish reunification, maintaining the failing status quo is a cause for dreamers who cannot explain why a disinterested British public will want to keep spending more and more money on the place in perpetuity.”

“…the DUP has undoubtedly treated McGuinness as a less than equal power-sharing partner, contrary to the requirements not only of the Belfast Agreement but of the St Andrew’s Agreement, which both parties negotiated in 2006 to get their first foray in office off to a solid start.”

Read more in the Irish Times

“As the government in London works to steady Northern Ireland’s political settlement with one hand, it is rocking it with the other. The vote last year to leave the European Union—in which the Northern Irish voted to remain—presents several problems.

The Good Friday Agreement of 1998, which established Northern Ireland’s devolved government, was signed on the assumption of Britain and Ireland’s shared EU membership.

The Supreme Court is currently considering whether Northern Ireland’s Assembly should therefore be consulted before the government can trigger Article 50, the legal route to Brexit. If the court rules in favour, elections in Northern Ireland could delay the process.”

There are many parallels between NI in 1968 and the political climate in Europe and America today.

We could learn a lot from this history.