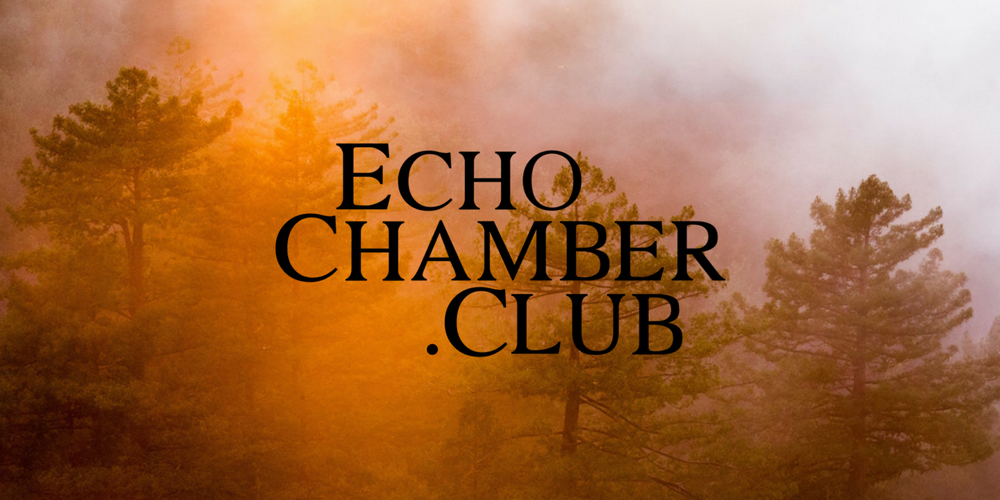 Privilege and the Echo Chamber Club

I received an angry email yesterday from a subscriber about the first Trump newsletter I’ve published in a while. It looked to explain why Trump’s supporters still approve of Trump despite the Russian scandal. It looked to media sites like Breitbart, Milo Yiannopolous and Fox News for our information. It also explicitly stated when these organisations made false claims. You can see it for yourself here.

“I’m in shock. This is deluded and unfounded extreme right nonsense. Especially the claim that Trump supports marginalized people. This work you’re doing is an awful disservice to people who are actually dispossessed. Maybe keep your nose in the politics on your side of the pond and unsubscribe me immediately.”

I wasn’t entirely sure what position he was coming from. I got the impression that he believed my newsletter is created for Trump supporters and these are views that I hold. This was my response:

“I really appreciate your email and I have unsubscribed you from the list. I know that a lot of the information I send out is controversial. By its very nature, I present the (often chilling) views of people who are not liberal nor progressive. This can be very hard for people to stomach.

Just so I can understand your view in a little more depth, could I ask what you were looking for from the Echo Chamber Club?

Finally – to let you know – I do not agree at all with the views I present in the newsletter. I do not believe that Trump is a good President, nor do I believe that he offers a message of hope. But other people do. These are people who have a vote, families and lives that we simply can’t access via our normal media distribution channels. That is all the ECC attempts to do – show our liberal and progressive subscribers ideas and articles that we don’t often see nor confront.”

I wasn’t really sure what exactly the project was. I met you in person once and you took down my email. I’ve lived in Europe and while news can be quite liberal there, we absolutely have no shortage of extreme right news in the mainstream in America. There’s no void that your project is filling. Trump voters have Fox news that religiously supports him from the beginning to now, various moderate conservative print news, and extreme right political talk shows on public radio. The election results could not have been possible without the massive influence these outlets have on a national scale. Im sorry, but I still feel you are out of touch with what the American public has access to/”what they need”. You responded patiently, so I felt obliged to respond patiently, but I really don’t wish to discuss further.

After receiving this I vaguely remembered meeting him about 9 months ago. I don’t believe I would have subscribed him to the newsletter myself, but he may have subscribed whilst we chatted and I was next to him. I think it’s fair to say that he comes from a marginalised group. This is a group who fear persecution from Trump and Trump supporters. It would naturally be an emotive topic for him, in a way that perhaps I cannot emotionally relate to, because I am not from that group.

To address his claim directly:

I would summarise his first point as follows: “There are a lot more right-wing mainstream media outlets in America compared to Europe

Ordinarily, I’d message someone back to ensure I entirely understood their point of view, but the emailer explicitly stated he did not want to be contacted again. I hope he would agree with this version of his argument.

I would agree that more ‘extreme’ right news organisations are household names in America (and indeed all over the world) compared to European publications. I can’t immediately think of European publications that have the same weight and influence as these two. In the UK we might point to the Daily Mail and the Express. I wouldn’t really put these in the same category as Fox News, Breitbart and Infowars. I’m not sure about similar news organisations elsewhere in the world.

I want to make clear that this is just me trusting my gut. I have no data to back up this claim, nor have I read any studies which mean that I can speak about this with authority.

Nevertheless, in the UK, many believe right-wing mainstream news is directly responsible for pushing a hate filled agenda and influencing Brexit.

So I suppose I’m saying that I get his point to an extent. My response is that American media is completely different to other media, but this does not mean it is not comparable with what happens in other countries.

Americans have greater accessibility to alternative points of view than Europeans

To move onto his second point which I believe can be summarised as follows: “these right-wing mainstream outlets are a lot more accessible to metropolitan readers compared to Europe”

Very few of us who consider ourselves to be progressive or liberal decide to check out Breitbart every morning. It’s emotionally draining and we’ve frankly got better things to do. I would guess that the only time we do look at Breitbart is if one of their journalists has made a particularly inflammatory point.

This is the point of the Echo Chamber Club. You might be aware of different groups existence, but we want to show you a different point of view which gives ultimate credence and respect to those that hold it. What’s more, we find as many different groups, views and ideas as possible and offer a wide variety of perspectives to our audience. Frankly, if you did want to completely understand the extreme-right, then I would recommend you read Breitbart every day, and not that you sign up to our newsletter. However, in the past 5 weeks alone we’ve looked at caste discrimination, libertarianism and the Handmaid’s Tale.

It’s also worth mentioning that the majority of our readers are based in the UK, and that the email scandal was front page news here for 2 days. American politics reverberate around the world.

But there is perhaps something that the Echo Chamber Club maybe guilty of that I’d like to explore.

We come at subjects from a point of view of privilege. By its very nature, our group tend to be well-off and well-educated white people. Of course what I’m about to say isn’t true of all subscribers, but broadly: we don’t face violence and we have good jobs and income.

As a result of this, we don’t often have the emotional gut reaction to different points of view. I am not affected by the travel ban, and although I’m not particularly happy about it, I am not directly threatened by it. There will be a different emotional reaction from a person who is, and as a result cannot bear to hear the other point of view.

In which case, it’s very difficult to come up with a defence to this. The only thing I can say is that I pick my topics as thoughtfully as possible. My message is about spreading empathy and being tolerant of everyone. Even the people who we would not normally be particularly tolerant of. I’d love to hear what you think here.

Finally, just to let everyone know that I have published his email and my response in full, so I have not tried to misrepresent his view at all. Equally, I do not wish to give away any information which would compromise this former subscriber’s privacy. However, it may well be that other subscribers have similar ideas, and I would very much like to hear from them. I try and be as diplomatic and open to criticism as possible. J

In Defence of the Views of White Men