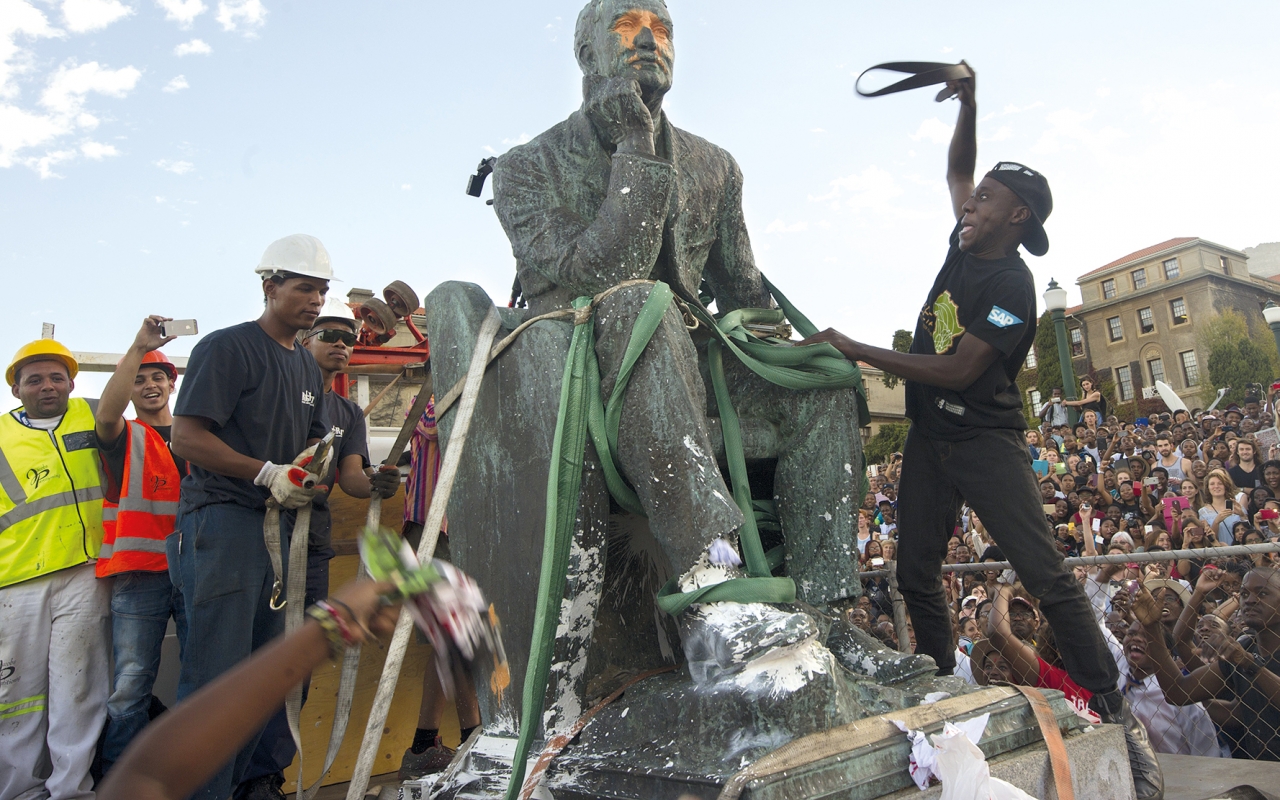 Shame on our anti-liberal stance towards white men

In 2015 a groups of students at the University of Cape Town demanded the removal of the statue of Sir Cecil Rhodes from the campus. They argued that Rhodes had been a privileged, racist member of a colonial society which had subjugated the indigenous South African culture. They claim that his symbolic presence needs to be eradicated to redress past injustices.

The idea has caught on like wildfire in American and British campuses. For example, Oxford University has its own version of the ‘Rhodes Must Fall’ group, and at Cambridge some student supporters of decolonising education have successfully argued for the removal of the Benin bronze cockerel from Jesus College.

Although many liberals may disagree with the calls from students, there still exists a wider pervasive notion that white men have too much voice in society – and there needs to be greater representation of selected groups deemed to be marginalised or oppressed.

The decolonisation supporters want to remove, or delegitimise, alleged symbols of white privilege from the curriculum. The works of white men – dead or alive – they claim, cannot speak to them or their experiences.

In this way they are echoing past arguments of feminists and left-wing educators who wanted to include texts by marginalised groups in the curriculum. The justifications for the demands of today’s decolonisers range from feeling hurt to claiming they are effecting fundamental political or social change.

Despite using the term ‘social justice’ frequently, trying to effect change by vilifying a group targeted on grounds of their sex, class, skin colour or opinions, often end up making social interaction more difficult, and supporting measures closer to vengeance than justice.

Removing a statue does not effect change

Removing a statue is relatively easy, but effecting institutional change is much harder. Airbrushing symbols deemed undesirable is counterproductive.

Who is helped by pretending Rhodes never existed? How does this address the material problems facing black students in South Africa?

“Looking at the empty space where the statue had stood, it was incredible to think that it had ever existed at all.”

Read more in The New Yorker

Offence does not legitimise censorship

In defence of David Starkey

If individuals or groups have feelings of offence it does not mean they have the requisite epistemological, or moral, authority to dismiss past cultural and intellectual achievements.

“By calling for the video to be censored, the petitioners are projecting a lowly view of individuals – apparently we can’t be trusted to hear all manner of ideas and make our own minds up. Universities are there to pursue the truth through scholarly work and teaching, not pander to the feelings of a vocal minority that prefers to censor rather than debate. The lack of protest at this blatant act of censorship does not bode well for academia or for those who support liberal democracy.”

Academics should teach and students should study

In defence of the ‘white’ curriculum

“While students often lead the way in demands for their courses to be more culturally diverse and less ‘pale, male and stale’, academics and institutions are quick to repent, ditch classic texts and populate the syllabus with material that takes account of diverse backgrounds and views …

That academics so readily acquiesce to student demands in this area suggests they are embarrassed by, and unable to defend, the knowledge traditionally taught in universities.”

The contradictory morality of university campuses

“[In modern universities]the diversity of race, ethnicity, and gender expression at college campuses is counterbalanced by a homogeneity of political views. ”

“Consistent with a structure characterized by various forms of diversity, those reacting to deviant ideas frame their reactions as an attempt to fight intolerance, but the reactions are themselves acts of intolerance.”

Educational sociologists Rob Moore and Johan Muller argue that the demand that education should represent the everyday cultural experiences of students disregards an important, hard-won intellectual accomplishment of past scholarship, which is that disciplinary knowledge has been made free from contextual contingencies by virtue of its abstraction from experience. Read here.

Rather than being an empowering educational strategy, as advocates claim, they argue it leaves students more bound to experiential knowledge from which they are less able to take a more objective stance which is necessary for both educational reasons as well as further attempts to effect social or political change in a democratic manner. A similar point is made by the philosopher Harvey Siegel here.

I am of the view that the current spate of calls by students and some academics to decolonise or diversify the curriculum are profoundly problematic from a culturally liberal, progressive political point of view, and are also deeply anti-educational.

Alka Sehgal Cuthbert is an educator, writer and PhD candidate in Philosophy and Sociology of Education at Cambridge University. She is the daughter of first generation Indian immigrants who grew up in the east end of London. Alka has taught at a comprehensive secondary school in North London, and studied and lectured at the University of East London before undertaking her doctorate at Cambridge.