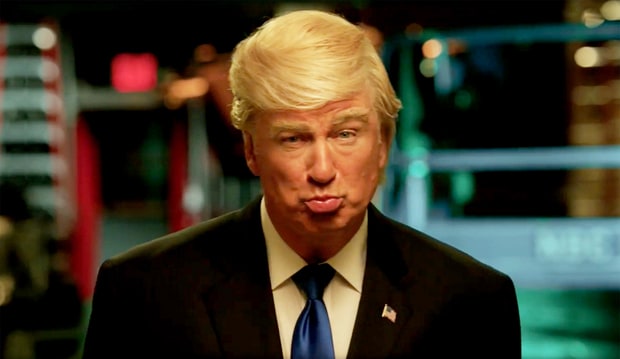 When do jokes go sour?

Political satire on TV, online and in print is enjoying a renaissance. Viewing figures for Saturday Night Live (SNL) are up 22% this year compared to 15/16. Similarly, the UKs satirical Private Eye had the highest circulation in its 55 year history for the Christmas 2016 special.

We still live in the shadow of the Charlie Hebdo attack in Paris, when many were shot for ‘causing offence’. We champion the work of these writers and artists. Comedy is an act of dissent, and a crucial part of freedom of speech.

I am a huge fan of satire. I watched Have I Got News For You with my parents far more frequently than I watched the 6 o’clock news whilst a teenager. So I wanted to investigate what different partisan groups may feel when they see satire I find funny.

Possibly more controversially, what about offensive cartoons and jokes disseminated on 4chan. Could these anonymous writers defend Pepe the Frog in the same way I defend Alec Baldwin’s impression of Trump?

“Bigots deploy satire just as readily as frustrated idealists. Look at the history of caricature and you will see many racial stereotypes that appall modernists, but worked fine in the quick-to-identify, ready-made xenophobia of previous eras – the grasping hook-nosed Jew, the buck-toothed coolie Chinaman, the wide-eyed, simple-minded, naturally rhythmic Negro. If we can summon up disgust for these failures of pre-enlightened satire, it shouldn’t be hard to empathize with those who see the same forces at work in contemporary caricatures of Muslims.”

Read more in the Globe and Mail

Saturday Night Live is a disgrace

“Another example is SNL noob Pete Davidson recently saying “F*ck you b*tch” to President-Elect Donald Trump. I fail to see the humor. I fail to see the wittiness. I fail to see the edginess. All I see is a butthurt 23-year old snob on an unfunny show spewing hatred and filth. … For all we keep hearing from the left about how divided America is, SNL appears to be an agitator-in-chief, only interested in encouraging viewers to share in their caustic bile. Where’s the laughs?

Or how about that nauseating “cold open” where comedic hack Kate McKinnon (in her Hillary costume) sang the recently departed Leonard Cohen’s “Hallelujah” after Hillary was flattened by Trump in the General Election? Nothing funny about that. My guess is that Kate McKinnon is royally butthurt that she just lost 4 years of guaranteed “work”. Good riddance, I say. McKinnon’s Hillary Clinton impression was awful, Rachel Dratsch would have been funnier for the role of Hillary. Yet, the press just fawns over how touching a moment it was. Agenda Comedy…but then again, there was no actual comedy.”

Laughing at politicians has lost its edgy nature

“There is another reason comedy’s political power has faded. Satirists’ power to undermine the system depends on their position as outsiders, calling out the corruption and failures of the ruling class through laughter. But as Heather LaMarre of Temple University says, many political comedians are no longer the little guy picking on the big guy; they’re celebrities—part of the liberal urban elite.”

What’s the role of satire in the Trump era?

“What this continual lambasting by the late-night comics could do is serve to sort of harden [viewers’] positions,” Professor Baumgartner tells the Monitor in a phone interview.

“If people really don’t like Trump, I would think that they would want to start to be worried, because the constant barrage of anti-Trump media and late-night joking is probably serving to bolster his support among his supporters.”

“If you really want to bring the guy down,” he adds, “maybe you should leave him alone for a while.”

“People process humorous political messages differently than they process serious messages… By allocating scarce cognitive resources to understanding a joke, or by discounting political humour because it is “just a joke” that does not deserve scrutiny, citizens are less likely to critically process arguments in humorous, compared with serious, political messages.”

“The evidence from this study suggests that… if anything, comedic news makes people more likely to engage in partisan selective exposure. Further, those viewing comedic news became less, not more, tolerant of those with political views unlike their own.”

Although we feel we can see the difference between a Pepe the Frog white supremacist meme, and our own piss-take of southern Trump supporters, it’s quite difficult to define exactly where the boundary lies. How can we stand up for Charlie Hebdo attacking Muhammad, whilst condemning the horrendous racist memes created by the alt-right? I’ve done a lot of soul-searching, and I’m struggling to see a massive difference.