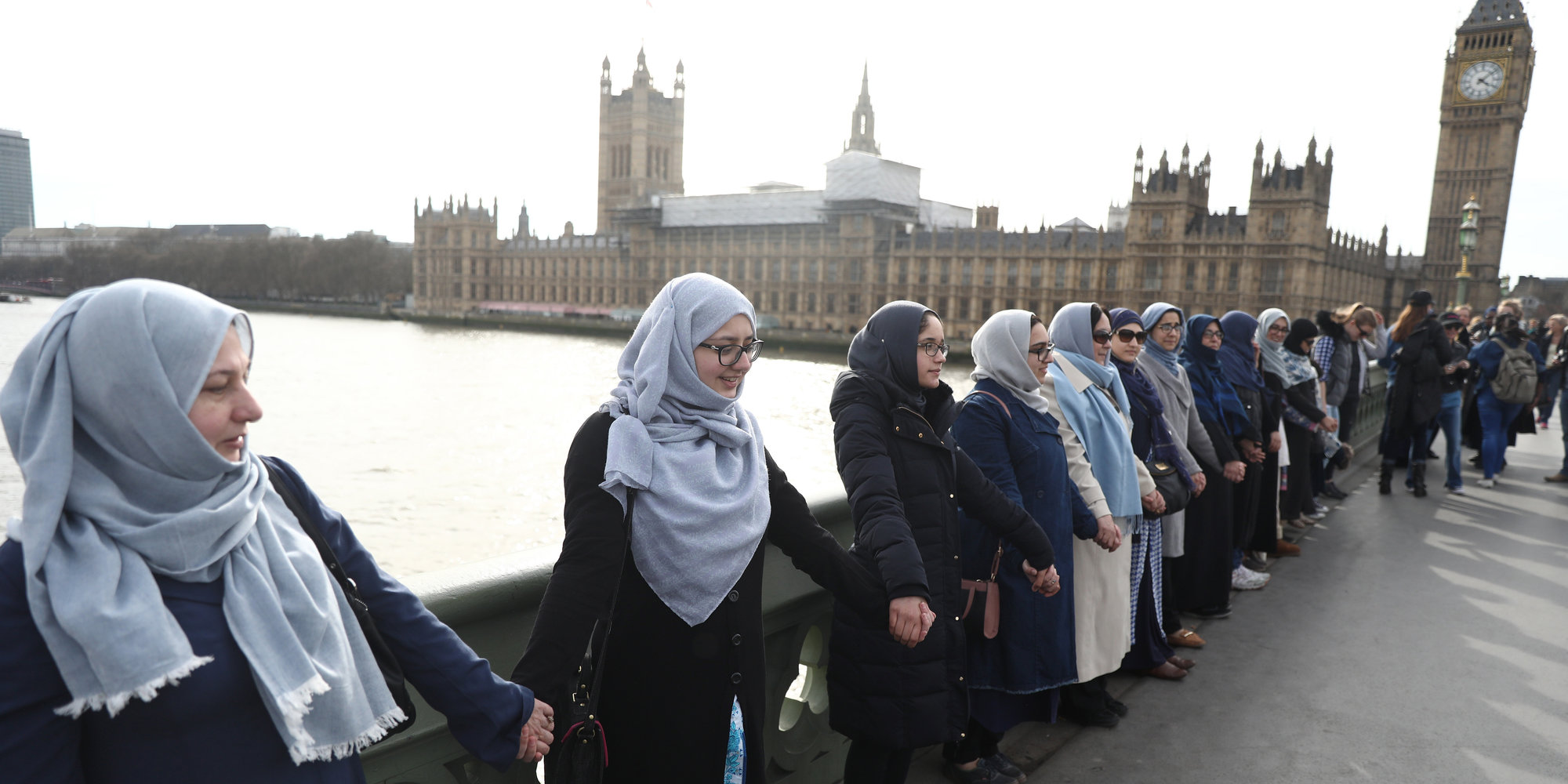 Islamic culture is thrust into the mainstream media across all political spectrum. And there are two main narratives. One, a liberal perspective ensures we see the most progressive view of Muslims around the world. Programmes like the BBC’s ‘Muslims Like Us’ and Channel 4’s ‘Extremely British Muslims’ educates the British public that the Muslim next door isn’t that different from them after all. The other villainises the religion, believing that every Muslim wants to enslave women and commit Jihad.

There is another view. How can a liberal culture accept the treatment of women within Islam? But surely we must understand the feminist movement within Islam itself for this question to have weight.

As a guest contributor, I wanted to focus on the experiences of my mentee, Jasmine*, a 16-year-old British Bengali Muslim woman growing up in East London. (N.B. Jasmine is a pseudonym).

Listen to Matthew d’Ancona on the ECC podcast

Despite being a mixed race Arab/English twenty-something woman, I have never experienced any form of prejudice nor racism. So I was sure that growing up here must offer a great deal of opportunity whatever your religion and culture. However, I now realise this was naive. Jasmine has a lot of obstacles transitioning from girl to woman, that I never had.

Based on my couple of years experience working with the mentoring group, I present some studies and articles that suggest her experience is more widespread than imagined. Many Muslim young women from British Asian communities are being let down by their contemporaries.

“Muslim people suffer the greatest economic disadvantages of any group in society. Unemployment rates for Muslims are more than twice that of the general population (12.8% compared to 5.4%) and 41% are economically inactive, compared to 21.8% of the general population. The disadvantage is greater still for Muslim women: 65% of economically inactive Muslims are women. We have found the reasons behind this to be varied and complex. They include: discrimination and Islamophobia, stereotyping, pressure from traditional families, a lack of tailored advice around higher education choices, and insufficient role models across education and employment.”

Read more in the report 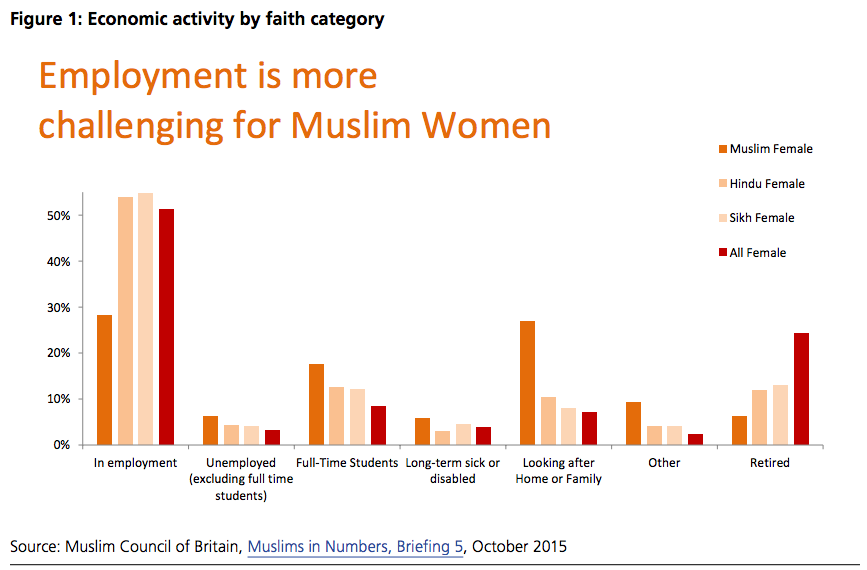 “Many Muslim women face a triple penalty, impacting on their employment prospects: being women, being black/minority ethnic and being Muslim.”

“Not underestimating the relevance of contemporary debates on the role of husbands and wives, among Muslims there is a conventional cultural acknowledgement (not religiously mandated) that women are homemakers and men are breadwinners. This could restrict the business and employment choices of Muslim women. Returning to work after a substantial period of time bringing up children could be difficult.”

“Both young people and parents need to understand very carefully the importance of choices that are made at GCSE level and A Level, and the way that those can act as barriers to which universities you go to [ … ] it can stop students accessing certain sorts of universities for certain sorts of courses full stop. Otherwise, without that knowledge, they can think they are working towards high performance and then find that it is the wrong sort of currency.”

A common theme in our sessions was the ‘us and them’ narrative; what was appropriate for her as an Asian Muslim girl and what ‘white’ young women could do and believe. This does not only cover A-level and university decisions. It also affects the career she goes into afterwards and how that impacts her marriage choices.

One worrying trend, although not specific to a Muslim Bengali community, is around mental health.

We talked about her university educated sister, who needed to earn more than £23,000 so her husband could get a visa to come to the UK from his rural village in Bangladesh. They had only met twice previously. She openly discussed her sister’s nervousness of her husband’s arrival within the next 9 months. I asked about her sister’s mental well-being and was swiftly told that depression and anxiety were ‘white people’ problems.

Bringing what appears to be two very different ideals together is never going to be easy. However a number of new initiatives are exploring this narrative.

“Feminism among Muslim women, like feminism among non-Muslim women, is hugely varied and one common vision of what gender equality is in Islam should not be assumed. Muslim women vary in race, social class, culture, and as people, and may range considerably from those following Islam in a typically conservative way to women with a more liberal lifestyle.”

Read more in Islam and Feminism

“An awful lot of Muslim women have felt excluded from the debate about women’s rights and this project really focuses on bringing ordinary women into a debate about Islamic feminism that has so far only really been heard in academic circles.

‘[islamandfeminism.org] is really taking off. Islamic feminism is not a new thing, which will probably surprise most people, but Muslim women have the same core concerns as white, secular, British women: the workplace, discrimination, childcare.

Read more in the Debrief

It seems that aspects of the Islamic faith and the accompanying culture can be used to inhibit women’s development and life choices. I worry that our Western guilt means we accidentally partake in this cultural oppression.

Jasmine failed all her A-levels. I learnt these were subjects she was encouraged to take by her family, and not by her teachers. But there is good news. Against familial advice, she is now working on her BTech and flourishing – something which is wonderful to see.

How many other young Muslim women born and raised in the UK are having a difficult and controlling start to their adult life? It’s clear that we are letting down a huge number of ethnic minority women in the UK. Those of Muslim faith are hit the hardest.

Camila* lives in London and has worked in professional services in the city for 7 years. A passionate atheist and feminist she has recently become more involved in intersectionality and the support of oppressed groups in the UK. She has used a pseudonym to protect the identity of the person she represents.