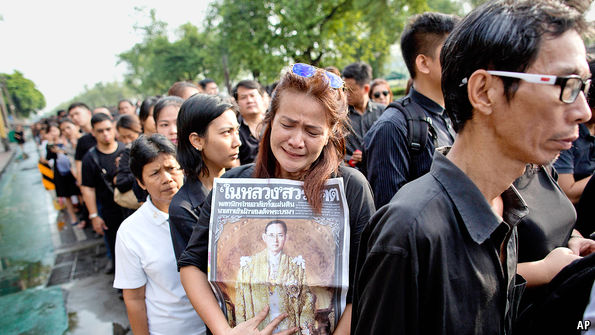 The complexity and secrecy of Thai politics

King Bhumibol of Thailand died on the 13th October. A long period of mourning for an incredibly popular King has ensued. The political situation in Thailand is fragile as a result.

This is common knowledge. But where is the complexity and how do the people feel? Why is the political situation fragile?

A couple of Google searches for those in our echo-chamber only leads to information for tourists. “How do I show my respect for the Thai people whilst I am on holiday? What can I wear in Thailand? Is the Full-Moon party still on? [No – of course not!]”

Thailand is southeast Asia’s second biggest economy. Tourism accounts for between 9 – 16% of GDP. There are currently 321,347 people in prison, accounting for 1 out of 200 people incarcerated – 70% of which are in there for drug offenses. (In the UK 1 out of 1000 people are in prison). It is a country of dichotomies, and extreme secrecy of the complexities of the political situation.

As ever, The Echo Chamber Club wants to encourage you to find different views outside of those immediately presented to you – we hope this will spark curiosity about the political situation in Thailand.

The King is Dead

“He would spend as long as six months a year, in civvies and with a camera swinging round his neck, touring Thailand’s impoverished provinces. He met the poor rice and rubber-farmers whom the elites disdained, set up experimental paddy-fields and started co-operatives.”

“He pledged that he would not take sides in Thailand’s politics. But behind the scenes the palace’s power grew, stoked by a cabal of ambitious princes. They made Bhumibol one of the world’s wealthiest men; his court could outspend any politician or general who dared vie for the people’s adoration.”

And the Ministry of Foreign Affairs in Bangkok’s reply:

“King Bhumibol performed his duties as a constitutional monarch in a neutral manner and stood far above the turmoil of Thai politics. When politics threatened to spill over into bloodshed, King Bhumibol would step in and demand compromises that saved lives. The idea that he encouraged political movements is ridiculous.”

Read more in Letters to The Economist here

They said we were brainwashed

“The assumption that the love we have for our king is purely because we are under-educated and the failure to recognize his accomplishments, because you’re stuck with his title, is superficial and pure ignorance in truths and dimensions of people and society of other cultures.”

The military, the government and the monarchy

The current prime minister is General Prayuth Chan-Ocha from the Thai military. A general election was declared invalid in February 14 after a military coup and little ‘democracy’ has occurred since.

Many believe the popularism of the King has given this precarious “mandate” legitimacy amongst the Thai people. The King endorsed the rule of the military by not intervening and demanding democracy. The next King (if there is one) may not command the same level of respect.

Lèse Majesté, the monarchy, and the military in Thailand

“If we are to understand the role of the King in Thai society, we have to understand the double act performed by the military and the monarchy. For ruling classes to achieve hegemony in most modern societies, they require both coercion and legitimacy. The monarchy symbolises the conservative ideology which gives legitimacy to the authoritarian actions of the military and their allies. ”

[Lèse Majesté does not allow you to speak against the monarchy]

Secret report on the monarchy from Bangkok to the Chinese, Australian and other secret services (from Wikileaks)

“Bhumibol’s eventual passing will be a watershed event in Thai history. It likely will unleash changes in institutional arrangements in Thailand, affecting the size and role of the monarchy, its relationship to the elected government and the military, and the roles of both of the latter, unmatched since the 1932 transition from absolute to constitutional monarchy, which nevertheless retained the monarchy at the core of Thai national identity.”

Read the report on Wikileaks here

Some report on Reddit that King Bhumibol was so important because the country is otherwise divided. This divide can generally be drawn between the north and the south. The North is a lot poorer than the South of Thailand. The North also supports

The North supports Mr. Thaksin, who was toppled from the government on accounts of corruption. The latest military coup in 2014 ousted Mr. Thaksin’s sister as prime minister, as the military believed she was being controlled by her brother, and was thus corrupt.

It’s peculiar because the south (generally) loves the monarchy on account of his work with charity and the poor. The north is a lot poorer than the south of Thailand. However, the north is less monarchist and supports Thaksin’s party, and this angers the political views of those in the South and the military.

You go your way, I’ll go mine

“Mr Suthep’s [leader of the Democrat party popular in the south] protests are just the latest round in an increasingly bitter struggle for the political soul of the country, between the northern red shirts [aka Mr Thaksin’s party] and an ultraroyalist establishment that controls much of the capital and the southern provinces”

“It is now often forgotten, even in Thailand let alone by foreigners, that the North was once the separate Lanna kingdom, as powerful as that of Ayudhya to the south and with its own language and writing system. After a period of Burmese occupation it split into two smaller kingdoms, Chiang Mai and Lampang, which became loose vassals of Bangkok.”

“Nation, Religion and Monarchy” is a constant source of violence

“Today during the imposed mourning period for the king, a mixture of violence and socialisation are being used to enforce a public expression of royalism. Howling mobs of fanatical royalists attack anyone believed to be anti-royalist and this has the backing from the general who runs the so-called ministry of justice. ”

The Return of the Divine King

“In a rather unexpected turn, the emergence of new forms of rituals following the death of King Bhumibol therefore seem to be paving the way for some elements of ‘traditional’ cosmological understandings of divine kingship to make a dramatic return.”

It’s interesting to see ambivalence towards a culture which has little economic nor international military power. We have a much more thorough understanding of the political situation in China or North Korea because their economies and decisions have the potential to disrupt our way of life.

These articles on Thailand hopefully give context to the repression and complex nature of Asian politics. Whilst we may care about the beautiful islands of Thailand, we have little regard for the people themselves.