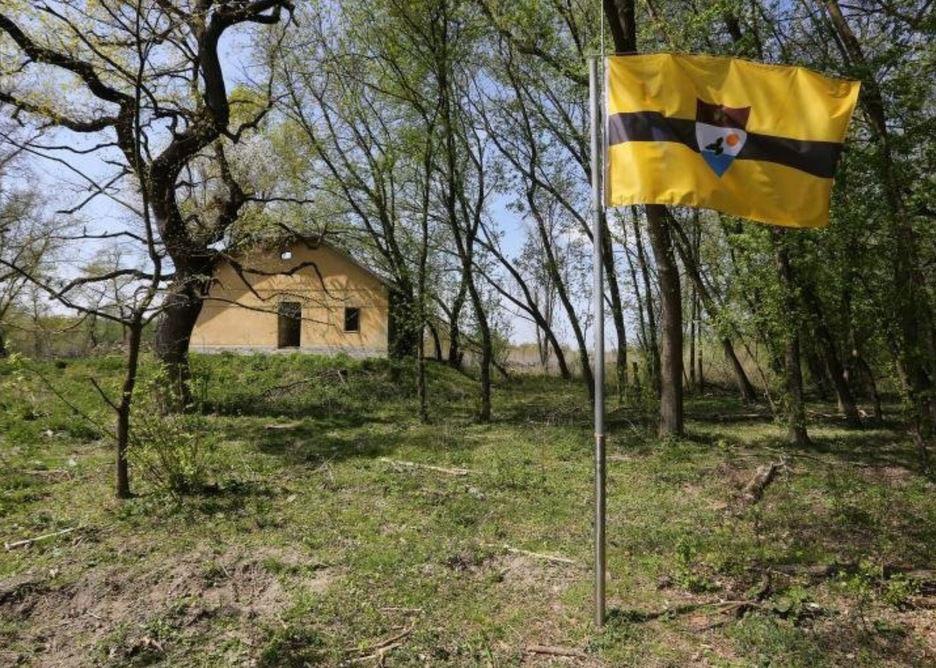 It seems like (in the UK at least) we’ve been bombarded with emotionally exhausting and horrific events that require our immediate attention. Various elections, terrorist attacks, revelations from the US and so on. So for this newsletter I wanted to take a step back and deep dive into libertarianism. It seems like this is an ideology that we’re aware of, but particularly in Europe, we don’t tend to hear that much about.

This may change. In April 2015 a Czech politician called Vit Jedlicka realised there was a 7km2 piece of land in Europe called Gornja Siga that was not claimed by any country. It sits between Serbia and Croatia on the Danube river and was ‘terra nullius’ because of the territorial dispute that still exists between the countries. So Vit travelled to the site with a brand new flag and claimed the land as a new country – Liberland. This country would be a brand new libertarian paradise.

Vit attracted a large amount of worldwide press when this event first happened, though the tone of the pieces showed that most dismissed him as an amusing eccentric. Perhaps this view is understandable, yet some still took him seriously. Croatia arrests anyone who tries to set foot on the land because they feel this development muddies the dispute they have with Serbia. Vit himself isn’t even allowed in the country, and anyone suspected of being associated with Liberland are subject to extensive and threatening security checks at Croatian borders.

Over two years on, Liberland has 75 ambassadors who are each seeking recognition from other nation states. This may be a crazy political project that will become reality.

Here’s a couple of links to articles and books which talk about libertarianism and Liberland.

Second, while our society remains generally based on equal rights and capitalism, every day new exceptions to those principles are carved out in [large cities]. Each new government directive takes a little bit of our freedom, and we should think carefully before giving up any liberty.

Third, liberal society is resilient;… but it is not infinitely resilient. Those who claim to believe in liberal principles but advocate more and more confiscation of the wealth created by productive people, more and more restrictions on voluntary interaction, more and more exceptions to property rights and the rule of law, more and more transfer of power from society to state, are unwittingly engaged in the ultimately deadly undermining of civilization.”

“One of the key insights of public choice theory is that we often get excessive government because the people getting handouts from any particular program have a very strong incentive to lobby for those goodies while the average taxpayer often does not have the time, knowledge, energy, or incentive to either learn what’s happening or to figure out how best to fight against the various counterproductive redistribution programs.”

Plus watch a video explaining this concept here

Liberland’s constitution: is it libertarian enough?

Interesting insight into how Liberland goes about making a practical constitution that fits with Libertarian ideology. There are sections on:

And see the Liberland Constitution here

Liberland: leading finance into the future

“The financial system of Liberland will not be about dictating personal behavior nor will it be about regulating people out of business. Instead, it will provide an environment that will encourage the natural development of the market.”

“Compliance will exceed global standards. There will be a zero tolerance policy for illegal activities and funding in Liberland.”

“Additionally, Liberland will respect the major trade pacts made between other countries, both regionally and around the world. With this structure in place, people and businesses can have confidence in the legal system, and the government of Liberland.

In short, Liberland will be supported by the rule of law.”

“Jedlicka says a key formative experience that led to Liberland was seeing his father’s company go bankrupt when the Czech Republic’s central bank arbitrarily raised its interest rates by 25%. “I was pretty young at the time and they were troubled times for my family, so I wanted to find out what was really behind this, so I went to study at the CEVRO Institut, Central Europe’s only libertarian university.”

Jedlicka argues that “every state was originally set up on terra nullius and just as the human mind has no limits, there is no end to how many people could live here: it only depends how high we can build.”

Read more by Daniel Nolan in the Guardian

“Many [radicals] think, in one way or another, that modern capitalism and individualism is to blame for today’s problems. Liberlanders are the refreshing opposite: they think we need more of both. And the biggest problem of all, the arch-enemy of freedom and prosperity in the world, is the modern nation state.

I’d never given much thought to the nation state before, considering it part of the natural order of things. But this political system, a blend of ‘nation’ (meaning people with common attributes and characteristics ) and ‘state’ (an organised political system with sovereignty over a defined space) is in fact a fairly modern invention, a response to mass industrialisation, war and the first large-scale communications networks.”

An extract from ‘Radicals’ by Jamie Bartlett

Like many of you, I have been deeply troubled by the Grenfell fire in West London. I live in a council owned block myself and have felt real hopelessness and despair when communicating with Tower Hamlets Homes. The block I live in has problems with damp, unhygienic trash disposal and a potential drainage issue which affects the foundations and ground floor flats. Despite a very expensive renovation project in 2015, many of the concerns of residents were ignored. In fact, we’re still not entirely sure what was done with the money.

In 2014, I went to local and national journalists with the story and was told that it wasn’t interesting enough for publication. I believe that residents in various council blocks will know the problems they are facing with their landlords, and it will not just be limited to fire risk.

I wonder if we could create something similar to the Everyday Sexism project, but instead highlighting problems tenants have with their landlords. If this is something you’re interested in creating, then let me know and I will support you in every way I can. There are national issues about housing and housing associations. It’s not just restricted to Grenfell but to council housing over the entire country.