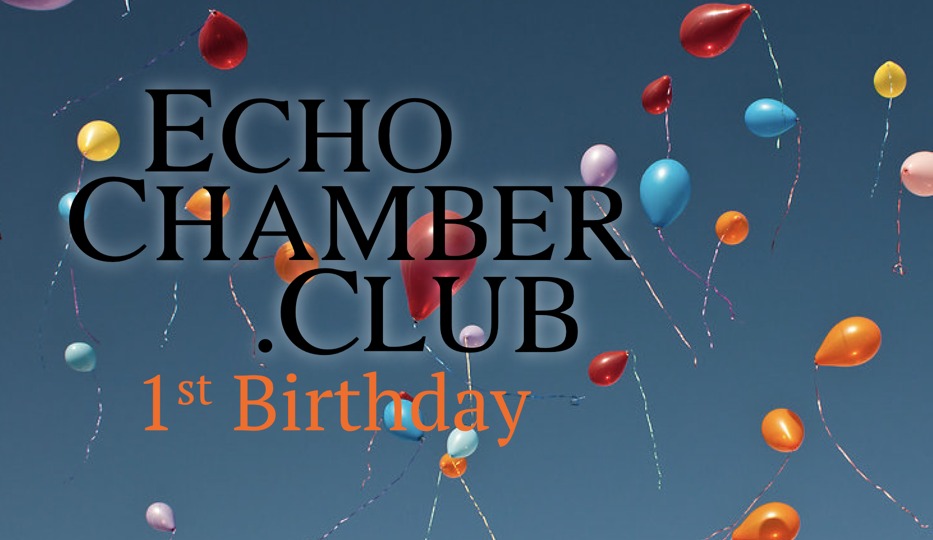 A year ago I sent the first Echo Chamber Club newsletter to 86 subscribers. The idea for a weekly newsletter that gave an alternative viewpoint came in May 2016 when I visited my friend studying an MBA in Barcelona. The break from London meant I could think creatively about solving the problem of echo chambers. The Brexit vote was coming up, and despite decent support for Leave, I had seen very few articles written in support of the position. It was concerning.

I was working as Head of Commercial for a software start-up where you could easily create your own algorithm for filtering through news feeds online. But few seemed to be using it for politics. I thought that if I started to find and research alternative viewpoints, then I would be educating myself, and if I sent out a newsletter to subscribers then I would feel like I had to do it every week. Perhaps I could help a larger community see the world through the eyes of others.

On the week leading up to the 1st July I’d spent my evenings building a website and working out a format, and eventually ‘launched’ on 30th June by posting the link to Facebook and Reddit. I was expecting a couple of sign ups, but when I got 86 in 18 hours realised I had to find some content for the first newsletter. I stayed up all night and curated 4 articles on Brexit and entitled it: ‘View from Leave’.

Every week since then, I’ve sent out a newsletter with the aim of challenging my readers to see a topic from another point of view, or understand a sub-culture or grapple with our own ‘indisputables’. So, for our first birthday, here’s a selection of newsletters that I’m particularly proud of. Hopefully, this will draw your attention to subjects you might have missed and will also give you an insight into how I feel about some of the work the ECC has done.

The newsletters that changed my mind

Are safe spaces really the enemy of free speech – September 2016

We started talking about safe spaces in the UK through the summer of 2016. They were described as an American export that had no value at all. A safe space was defined as somewhere where you could protect yourself from points of view that upset you. Columnists wrote about ‘generation snowflake’ and wondered why we cannot bear to be offended. Given I knew no better, I bought into this argument. I value freedom of speech.

It took me about 12 hours of research to find positive commentary but then I stumbled across this lecture by Jacob T Levy and completely changed my mind.

I’ve identified myself as a feminist since I was an undergraduate philosophy student. Although I recognise there are many definitions of feminism, being pro-choice on abortion was non-negotiable. Any feminist had to be pro-choice by definition.

For the Women’s March, I started to look into modern day feminist thought. I realised that many women feel the same as me and pro-life feminists were excluded from the event. When I researched the work of New Age Feminists, who are a secular group of pro-life feminists, I realised their philosophy is braver than many pro-choicers. So I now believe you can be pro-life and a feminist.

The hardest newsletters to curate

I’ve written a lot about the cognitive dissonance and nausea I get from sending some of these newsletters out. One of the worst for me was the newsletter I curated about the destruction of East Aleppo, but from the perspective of the Russian and Assad. At the time, my news feed was filled with videos of Syrians asking to be saved from potential slaughter. This was coming from very credible sources like the BBC and the Guardian.

The Russians made a counter point. There was no electricity, no telecommunications, no Wi-Fi and no phone lines. So how on earth could destitute people from the area be transmitting video? Syria was far too dangerous to have journalists on the ground, so it was impossible to know what was really going on.

I cried a lot about the topic, mainly down the phone to my poor mother as I sat alone in my Berlin room. She gave me the strength to go ahead with the topic.

Afterwards, I got a couple of angry emails back, but no one unsubscribed. A small sign that what the ECC does is worthwhile.

Protecting children from terrorists – May 2017

I experienced similar emotions last month when I defended the comments of Katie Hopkins after the Manchester bombing.

I wrote the newsletter about 3 times – and each time it seemed to miss the mark. However, on this occasion, I got a lot of support from my subscribers. They knew it was a difficult piece to curate and were very positive about the work I do. At this point I realised I’d gained a lot of trust from the subscribers, and I really really appreciate that support.

The most prophetic newsletter

You might have noticed that I’ve stayed away from American politics this year. I’ve found it difficult to find a coherent alternative viewpoint that hasn’t already been discussed. That was not the case at all last year where we wrote about Russia and America, ‘hacking’ elections, the rise of Trump and the backlash against his election. Here’s a notable one where we claim that he will be elected as early as 3 months before it happened.Though honestly I’d prefer that we’d got this one wrong…

Over the past year there has been a lot of talk about online information manipulation, especially when it comes to fake news on social feeds and search results. I agree this is a problem that desperately needs attention. However, it should be approached in as a politically neutral manner as possible.

This newsletter detailed a progressive attack on a Republican by manipulating search results. It also details the way Obama micro-targeted specific voters with specific messaging in the 2012 campaign.

It’s my favourite newsletter because it reminds me how important it is to hold our own integrity at all times. We should not turn a blind eye if bending the rules happens to suit us. It will come back and bite us.

Finally – the Echo Chamber Club wouldn’t be what it is without the fantastic guest contributors we’ve had this year. Many thanks to Shyam Sakhrani, Alka Sehgal Cuthbert, Niall Crowley, Charles Orton-Jones, James Mitchell, Shefaly Yogendra, Andrew Calderon, Fernando Archetti and Murali Shanmugavelan (and our two pseudonyms) for curating newsletters.

On the Problems of Echo-Chambers