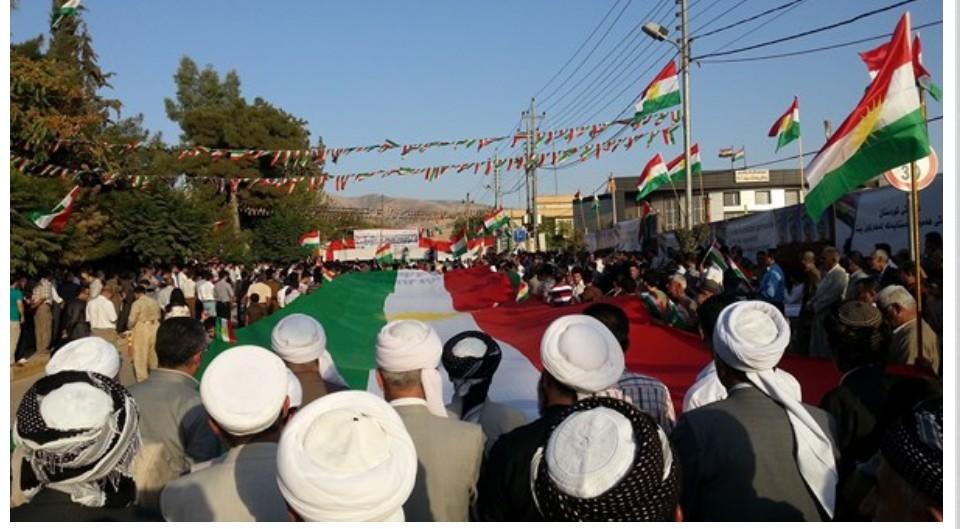 The Kurds vs The World

Given we talk about Brexit so much in the UK, I thought we might like to divert our attention towards other countries pushing for an independence referendum. The Kurd’s are going to the polls on 25th September to vote for independence from Iraq.

The Kurd’s have suffered over the past 100 years. After the collapse of the Ottoman Empire in the early 20th century, they were not given their own country as part of the Treaty of Lausanne. Instead Kurdish people were divided in Iraq, Iran, Turkey and Syria. More recently, the Kurd’s were persecuted and subject to genocide at the hands of Saddam Hussein in 1988. Although they have a somewhat devolved state, they want complete freedom to govern the way they want, and given their army has been strong through the war against ISIS, they hope this show of strength will convince the international community to support their cause.

However, this is not the case. When I looked for opinions on the Kurdish referendum, I found many Western voices are against the idea. They worry that creating a new country will cause irreparable damage to an already unstable area.

Having said this, these voices were still difficult to access. In general, it seems that we have little interest in the Kurdish referendum, despite our preoccupation with Syria and ISIS. This could well be because it is over a month until the election. Nevertheless, many in the region are publishing a lot on the subject now.

“She mentioned Kurdistan enjoyed a golden decade between 2003 and 2014…

Rahman said accomplishments in the oil, gas, and infrastructure sectors of that decade “should be recognized.”

The Kurdish official explained that after 2014 the Kurdistan Region faced challenges including the Islamic State (IS) war, its federal budget cut from Baghdad, international drop in oil prices, and the flow of 1.8 million displaced people and refugees….

… Kurdistan has no control over the monitoring policies. We don’t have our Central Bank to carry out quantitative easy,” Rahman continued.

“We don’t have a central bank with billions of dollars of reserves as Baghdad does. … When we are independent, we can use these financial tools,” she added.”

Ghastly 1988 attack on Kurdistan must not be forgotten

“As co-chair of the Kurdish Caucus here, I think it’s so important that we stop every year and commemorate and remember [the March, 16, 1988 Halabja chemical attack that killed or injured 15,000 Kurds by former dictator Saddam Hussein].

We are so fortunate to have the Kurds as allies in the fight against ISIS. And it’s important that we make certain that the Peshmerga have what they need to go about this fight, rooting out ISIS.”

Read the interview with Rep. Marsha Blackburn in the Washington Times

Ezidis wouldn’t have faced genocide had Kurdistan been a state: Ezidi Commander

“On Aug 3, 2014, IS stormed the Ezidi-majority city of Shingal, west of the Kurdistan Region. The jihadist group kidnapped and enslaved thousands of Ezidi women and girls, and carried out large scale executions of the Ezidi people.

“Had there been an independent Kurdistan, we [Ezidis] wouldn’t have faced the August 3 massacre. If Kurdistan were a sovereign country 100 years ago, similar to other nations in the world, the number of genocides and hateful attacks on the Ezidi people wouldn’t be as high as it is now,” Haider Shasho, Commander of Ezidkhan unit in Shingal, said during an interview with Kurdistan 24.

74 massacres and attacks have been carried out against the Ezidi community in Iraq in recent history.”

The world has acknowledged Kurdistan, even if they don’t realize it

“This brings us to the question of what makes a people or a nation. The accepted answer has been a common language, common culture and common values. If Iraqi itself differentiates between Sunni Arabs and Sunni Kurds and Shia Arabs they in fact have already split the nation. While the Arab portion of Iraq shares a base religion with differing practices they basically share a culture and language and national identity. The Kurds on the other hand share the basic religious beliefs of Islam they do not share customs, language, or values.

This should be sufficient to prove that the Kurds are a different people and are in fact a different nation. International law, the UN charter and other documents have for years called for self-determination of indigenous people.  If Sykes-Picot can in any way be rehabilitated let us accept the fact that boundaries can be changed, they are not forever. This time instead of the Europeans drawing the boundaries they can be drawn the way European boundaries were, based on the culture, language and values of the people inside the borders, not on the political/economic desires of a foreign power.

Independent Kurdistan would be a failed state

“To justify the notion that independence would be an easy, beneficial thing, many Kurdish officials cite the amicable divorce between Czechs and Slovaks that led to the dissolution of Czechoslovakia. However, there are many examples that arose out of guerrilla and military struggles that would perhaps be more analogous: Sudan and South Sudan, Ethiopia and Eritrea, Serbia and Kosovo, and Indonesia and East Timor, to name a few. In none of those cases has the separatist entity which won independence become a success by any objective criteria.”

The possible devastating outcome of a Kurdish referendum

“Kurdistan’s economic boom was short lived. In late 2013, the KRG inaugurated a pipeline to carry oil exports through Turkey. Baghdad’s international oil policy was being undermined by what it considered to be the emergence of a rival oil producer within its own borders.

In response, Baghdad refused to transfer the KRG’s share of the federal budget so long as it pursued its own independent oil policy… To make matters worse, Iraqi tourists dried up after ISIS’ invasion of Mosul, and even oil prices dropped by close to two-thirds.

…The KRG is now up to US$30 billion in debt, public universities are closed, the KRG is unable to pay its foreign investors and has been on the losing side of an increasing number of commercial arbitration cases…

In the meantime, the KRG’s political institutions have all but collapsed: the KRG’s regional president is refusing to step down from his position despite the fact that his legal term expired years ago (first in 2013 and then in 2015 when a two year extension expired), the parliament was suspended in 2015 after an opposition group grew too critical, the region’s security forces (the Peshmerga) remain as divided as they were decades ago, and the regional budget is not subject to any meaningful auditing process.”

I’d like to thank Alex Whitcomb for his help curating this newsletter and giving me insight into how the Kurds feel. He told me that many Kurds believe they will win the referendum, however this won’t have any legal consequence. They simply do not have the international support they require to be recognised as an independent state.

It seems crazy to say, but I haven’t taken more than 3 days off since May last year. So, for the next 2.5 weeks I’ll be taking a break. My aim is to read as much fiction as possible, swim in the lakes around Berlin and explore other areas of this country.

As a result, there won’t be a normal newsletter for the next two weeks, and the WhatsApp notifications will be on hold until the 27th August. I may also be a little slow to reply to emails. However, I have prepared two treats to replace the normal newsletter. So do keep an eye on your inbox on Sunday mornings.

Have a great summer everyone!